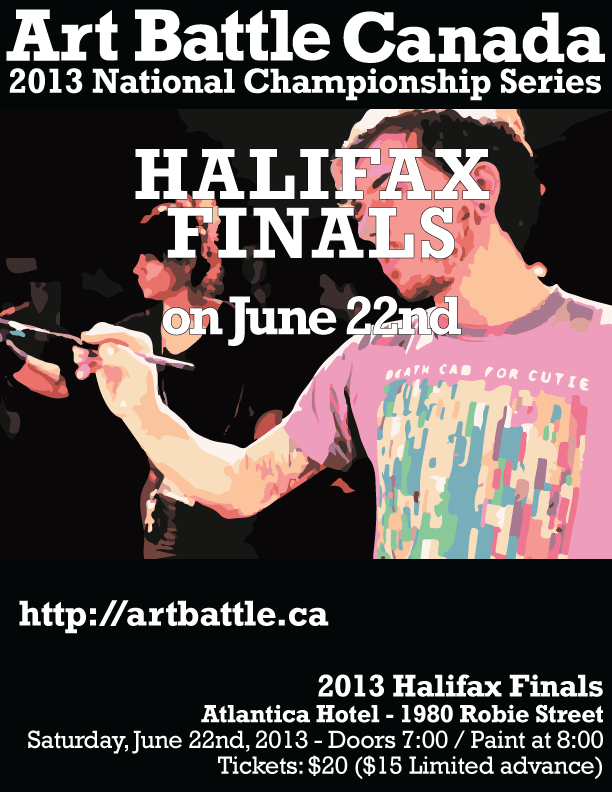 Congratulations to Mary Garoutte who has won the Halifax Finals and will represent Nova Scotia at the National Championship in Toronto on July 26th! Also a huge thank you to all the talented and courageous painters who have competed this season in Halifax and Truro and to the amazing fans that have supported them!!

This is it! Art Battle Halifax Finals are here! 12 painters will compete for the right (and a flight) to represent Nova Scotia at the Art Battle National Championship, to be held at the Art Gallery of Ontario in Toronto on July 26th.

6 painters have qualified by winning Art Battle events and 6 more all-stars have been chosen to fill out the field in this very special event.

The Champs who have already earned a spot in the Finals are:

The all-stars joining the Champs at the easels will be:

WHAT IS ART BATTLE ?
Art Battle is live competitive painting. Painters create the best work they can in 20 minutes. As they work, patrons move around the easels, closely watching the creative process. The medium is acrylic paint and the tools allowed are brushes, palette knives or any non-mechanical implements. At the end of the round, the audience votes democratically for their favourite painting and bids in silent auction to take the work home. This is Art Battle Canada’s 4th season and the first season in Halifax.

See you on the 22nd for the biggest event of the season!