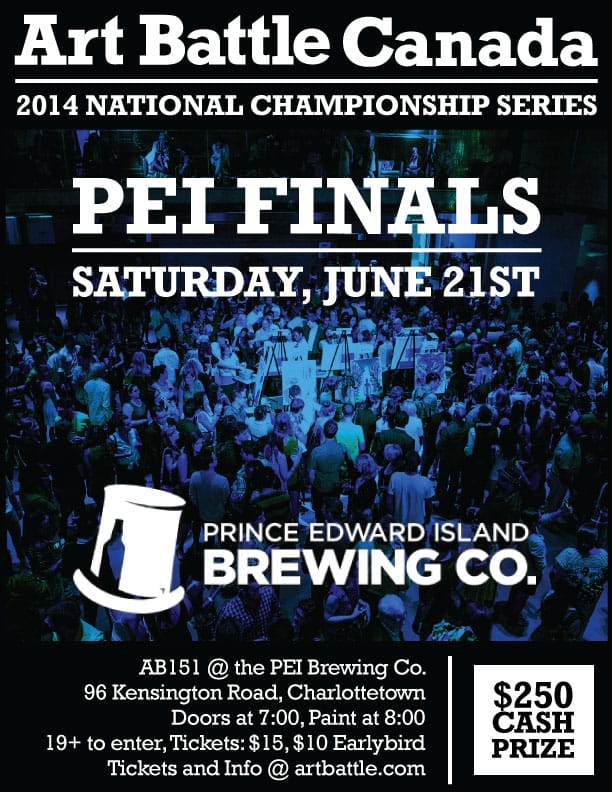 Please join us for the Art Battle PEI Finals on June 21st at the PEI Brewing Company! Art Battle Canada is having an amazing first season in PEI. There is so much creativity and courage on the Island, we’re proud of every painter who has stepped to the easel. The community and support for the Arts in Charlottetown is unparalleled. We can’t wait to celebrate the finals with you!

Art Battle in Charlottetown is presented in concert with the PEI Brewing Company at their beautiful new event space. Come join us for three fantastic rounds of live competitive painting. This is the final event on the Island this season, we will see the 4 Champions from events this year battle 8 All-Star painters for a cash prize and the opportunity to represent Prince Edward Island at the 2014 Art Battle National Championship. The National Championship event is in Toronto on July 26th at the building formerly known as Maple Leaf Gardens!

On June 21st, twelve professional and emerging painters will compete to become the Art Battle PEI Champion, earning a $250 cash prize and a spot in the 2014 Art Battle National Championship.

WHAT IS ART BATTLE?
Art Battle is live competitive painting. Painters create the best work they can in 20 minutes. As they work, patrons move around the easels, closely watching the creative process. The medium is acrylic paint and the tools allowed are brushes, palette knives or any non-mechanical implements. At the end of the round, the audience votes democratically for their favourite painting and bids in silent auction to take the work home. This is Art Battle Canada’s 5th season and our first awesome season in PEI.